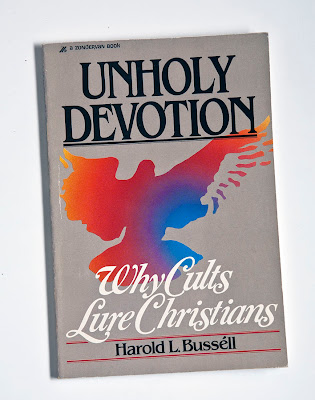 From the Back Cover
"As Christians we are smugly confident that the cultists are far removed from our own world. Surely none of our friends or family would ever be tempted to get involved with such 'crazy' groups. The jolting evidence presented in this book would indicate otherwise."
- Ronald M. Enroth
in the foreword
Some of the lessons of Jonestown are still to be learned. The cultic vision of Jim Jones had its roots in a typical evangelical church environment. The fact is that the seeds of tragedy can grow subtly in our religious lifestyle like tares among wheat.
The lure of the cults is not doctrine, but style. Not reasoned faith, but the promise of a better life. Many evangelical youth are drawn to cults because too often the marks of spirituality they set forth uncanningly resemble the qualities we exhibit in our Christian churches. Harold L. Bussell, an eye witness to the cult mystic, has dealt with many youth who fled their Christian heritage to follow the deceptive gleam of a cultic promise. Why?
These are only some of the reasons why cults lure Christians. But the author does more than point out faults; he sensitively shows from Scripture the corrective truths that can lead us and our youth towards spiritual maturity.
In Unholy Devotion Harold Bussell effectively sounds a warning that the road to a cult is paved with good inventions, but issues the challenge that "the truth will set you free."
Harold L. Bussell is Dean of the Chapel at Gordon College. He holds degrees from Bethany Bible College (B.A.), the University of Santa Clara (M.A. in Counseling Psychology), and Andover-Newton Theological Seminary (D.Min.). He is a former pastor and has worked with Teen Challenge in Europe.
Foreward
When most Evangelicals think of a cultist, the image that probably comes to mind is the persistent Jehovah Witness at the front door or the brainwashed Moonie selling flowers on a street corner. We wonder how thinking people can ever be attracted to cultic groups whose teachings are so distant from biblical truth. We pity them for the spiritual darkness that envelopes their lives.
As Christians we are smugly confident that they -- the cultists -- are far removed from our own world. Surely none of our friends or family would ever be tempted to get involved with such "crazy groups"! The jolting evidence presented in this book indicates otherwise. The primary objective of the author is to look at certain commonalities that cultists and Christians share before you conclude that such a suggestion is ridiculous or inappropriate, I recommend that you read this important book carefully.
Traditionally, Evangelical scholars have focused their attention on the heretical doctrines of cultic movements. Distinguishing false teaching from biblical truth should always be a primary concern of Christian cult-watchers. However, a unique aspect of Dr. Bussell's perspective is the assertion that Evangelicals are seldom attracted to cults and aberrational Christian groups because of their doctrine; rather, the appeal is that basic human and spiritual needs are being met. Cults are successful because they promise what the author calls that illusive "something more." His point is that Christians are just as vulnerable as anyone else in reaching out for a perceived "spirituality."
I remember how startled I was to learn that a former student of mine had joined the Mormon church. Intellectually he knew that the teachings of that movement are contrary to Scripture. Yet there were certain overpowering personal needs in his life that were going unmet; he was offered the bosom of a family in the form of the Mormon church and he succumbed. He had found a sense of community.
This book will disturb and threaten some readers. It will be difficult to escape the implication of the author's conclusion that cultic tendencies can be found in our own Evangelical backyard. For example, we need to hear what Dr. Bussell says about our vulnerability to destructive manipulation in some forms of group sharing so popular in Evangelical (and cultic) circles. Those of us who have researched cults know how effectively they use guilt, fear, and spiritual intimidation to exploit people. This book illustrates how Christians often open themselves to similar exploitation.
In the course of my own research, I have talked with many Evangelical Christians who, for a variety of reasons, have become involved in a cult or aberrational Christian group after having made a commitment to Christ as Saviour. Upon leaving the group, they have found the journey back to be painful, often lonely, and sometimes long. A common observation they have shared with me is the disappointment that few mainline Christians (including pastors) can comprehend how and why they were lured into a cult. At last I have a book that I can recommend which will explain clearly and powerfully why it can happen to us, not just to them.
- Ronald Enroth
Westmont College
Santa Barbara, California
Contents
Ch. 1 - Thank God I Am Not One of Them -- Or Could I Be
Ch. 2 - But You Can See The Love On Their Faces
Ch. 3 - The Lord Led Me
Ch. 4 - They Even Share Their Burdens and Pray Together
Ch. 5 - But We Have a New Testament Church
Ch. 6 - You Just Have To Hear Our Pastor
Ch. 7 - But Mormons Don't Drink or Smoke
Ch. 8 - The Problem of Pain
Ch. 9 - The Many Paths to Spirituality
Ch. 10 - Please Don't Water the Garden
This book may be purchased through www.amazon.com
Posted by The Grand Poo-Bah -- Purveyor of Truth at 9:01 PM

The Grand Poo-Bah -- Purveyor of Truth